There are multiple projects undertaken by the Davius Nursery from 2002 to present. 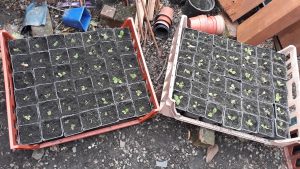 The main ethos is for any project to be successful via community engagement:

Please use the information to enthuse your own projects

The Biodiversity Cathays project is an ongoing project started in 2002 which attempts to improve upon limited green spaces via community engagement adding wildflowers and removing weeds/invasive species – and cleaning up blight spots.

Starting in the mid 2010’s; the Catherine Street Family Planting Boxes was a long term project from locals living in the immediate area wishing to make the urban area look more colourful and cared for with an emphasis on the natural environment being more present on this street.

By working with the majority of the families, several council departments and some local businesses – the design, family discussions/engagement has resulted in a pleasing design highlighting a low embodied energy approach and recovered materials to create this family project.

This was of great interest observing the various dynamics and contentious issues that occur between different participants as the project is brought to realisation.

The emphasis was on working under the tight space available, a unique dramatic design that would encourage more passers by to visit the garden, use as much re-used material as possible which were procured from the locale.

The Plasnewydd Garden (FB page) was launched in 2010 and has managed to keep running under tight constraints, whilst sadly other green space projects have collapsed.

Open every Saturday from 10am – please do visit and get involved.

Situated at one of the ‘main mouths of the district’, the Green island locked between three roads has fallen into a poor state in the 1980’s and 1990’s. At the turn of the century, it was perceived that as an experimental project – if specific wildflowers grown locally were added to this declining and limited green space; it would be an opportunity to see how the wildflowers could grow and what actions could be undertaken (through observation and bloody minded persistence) to reduce the vandalism of the site and improve its environmental aesthetic!

It is hoped that local people and commuters will sit on and enjoy this green space as a social focal point – and to enjoy the natural improvements made by local volunteers.

The discussions with the families on the immediate 5-6 streets surrounding both gardens in the mid 2010’s did observe and record a desire to see these two green spaces rejuvenated to their original condition. Over several decades the ground has been heavily compacted with millions of footsteps (in no small part down to the localised student population) which has caused a significant degradation of this green space.

This is a 5-10 year project which will require consistency of volunteering for these two important green spaces. Constant watering during dry [drought?] periods of spring and summer, consistent care of the added wildflowers – and keeping an observant eye to see the self propagated species crop up; which will be carefully dug out and potted, in order to be distributed in other places on the gardens.

Reintroducing indigenous UK Bluebells is a part of this project throughout the 2020’s in the middle area, complimented by re-achieving grass levels across both grounds. The periphery is intended to be a biological wall to entice nature, specifically bees, butterflies, wasps and other important insect species to use these new natural resources to fuel their evolutionary tasks.

Since the turn of the century, it has been consistently witnessed all over the ‘central town & districts’ the amount of dead bees that have cropped up. This has been very disconcerting given our global bee species are constantly under threat and international scientist have yet to confirm why our various bee species are in serious decline.

It is globally recognised by the scientific community that our various Bee species are in decline and this can have catastrophic impacts upon the future, we have to create stronger biodiversity habitats to increase the resources for our important insect species which are critical to the survival of humanity and wider global natural systems.

Urban areas are renowned for being over-developed, yet with finite space in cities/towns – it is important to improve upon what limited green space exists.

The issue of Global Warming is recognised by almost everyone in this day and age (after 50 years fo trying to raise the issue into the mainstream view) with the intermediate effect of town, countryside and cities being adversely impacted. Many believe huge  infrastructure projects are required to build in resilience against rising tidal levels etc.

It may be small measures, undertaken on an individual level – which if executed by millions of people will have a very positive impact upon our future generations.

With greater over development of a small city – loss of green space is a regular occurrence which we will be punished for as it contribute to local disasters.

Helping improve peoples limited green spaces in their gardens (and including digging up the ground and adding more natural soakways) we can contribute some token efforts as individuals to reducing localised flooding. Yet if 1000’s of neighbours implement these measures – the results on short to long term will have a significant positive knock on effect.

By encouraging the implementation of water butts in a dozen different locations of families close to the various biodiversity planting projects, we can stockpile emergency water to help us through prolonged drought periods. Just as importantly if every family household put a water butt in their frontage or back gardens this will reduce localised flooding (1 billion litres of water stored up is better than it being hurtled down our river systems.) so assuming a 300 litre water butt – if 3.3 million homes have a water butt added in – the reductions speak for themselves.

Having a resource of 300 litres of healthy rainwater stored in your vicinity would encourage more people to undertake localised wildflower planting (and maintenance) as it will be less distance for them to carry water from long distances – if we share our natural resources we can significantly improve the future’s outlook (and build some good community networks too!)

These were named by legendary local legend Mrs Barbara MacArthur, after several residents worked together to:

These have been solid contributors to the nearby planting projects, as the grounds have been superb for propagating 4 distinct indigenous wildflowers which are shared out to some of the projects named in this page.

The Sustainability and Faith is coming to be a main component of Faith and Community efforts which the Davius Nursery has undertaken various projects with the local Christian Faith groups and local Muslim Faith groups.

Efforts such as planting wildflowers in the locale, undertaking volunteer clean up efforts, reducing use of plastics and many other positive ideas and practices have been initiated by the local Faith groups to reduce environmental impacts.

The national Eco-Schools project is an important programme under the ‘Keep Britain Tidy’ umbrella body (Keep England/N.I/Scotland/Wales Tidy). We encourage all schools to partake!

There are many different facets to Eco-Schools which most of our Primary and Secondary schools are implementing. The Davius Nursery went into some challenging Secondary Schools to see how the 12-15 years old’s would like to see their Green Spaces improved. Idea generation, feasible applications that could be undertaken in a short amount of time.

Working with the local Community Centre alongside our young Adults with additional provisions – we have created Planting Boxes as a precursor to larger projects on the next streets. The overall experience or empowering and trusting our youth with these tasks was a real success that the families on immediate streets benefited from the planting projects being expanded too. Thanks to Red Rose School and their young adults inputs!

It does not just rest with in-school activity or youth centres, the Dav Nursery projects also expands to working the local Scouts as part of their Biodiversity badge and many other important skills sets projects. By reaching to so many people, local groups – everyone gets to experience some level of sustainable engagement to make their physical built environment a better place to be – and gives our youth a sense of ownership that, when they walk past the projects years later; they may think “I did that!”

There is so much our young people (and all other age groups) want to participate and create towards – we strongly encourage the parents/grandparents to work with Schools, Community Centres, Scouts Groups, Youth Centres and encourage your children and teenagers to get involved in such amazing ventures!

The most important thing of working with children and teenagers is not to do just a token experience and stand alone project – yet encourage the pupils to ‘take the skills home’ and see if they can be applied in their home, garden, street and local green space.

It was incredibly rewarding to hear the innovative ideas that young people we undertaken (shortly after the 2008 recession) to improve their locale. Ranging from picking up nearby rubbish when they went fishing, use of cycling (even schools did not) and many other things. Look to ALL age ranges – for the answers are in every community – on a global level.

What can you do?

Every small positive step you make will add up to a wider community / society positive haul of sustainable activities!